KVNA AM 600 is a commercial US-based radio station. The service is licensed to serve Flagstaff, Arizona. The channel covers the broadcast area of Flagstaff-Prescott, Arizona. The service’s branding is “ESPN 104.7FM AM 600.” The station is under the management of “Yavapai Broadcasting Corporation.” It broadcasts Sports talk programming. In addition to its 24/7 live programming, it has offered live streaming for international listeners. The station also handles profiles on social media.

The station hit the air for the first time in 1958. It streams on-air on the AM dial at the frequency of 600 kHz. The service has five sister stations named KKLD, KQST, KVNA-FM, KVRD-FM, and KYBC. The station has different translators to strengthen its signal through various cities of Arizona. K284BO also serves the great Flagstaff area. The meaning of its call sign refers to “K Voice of Northern Arizona,” which was its former slogan. The former call signs of the station are:
KEOS (1958-1981)
KZKZ (1981-1986)
KVNA-AM’s ownership has transferred from seven owners since its inception. 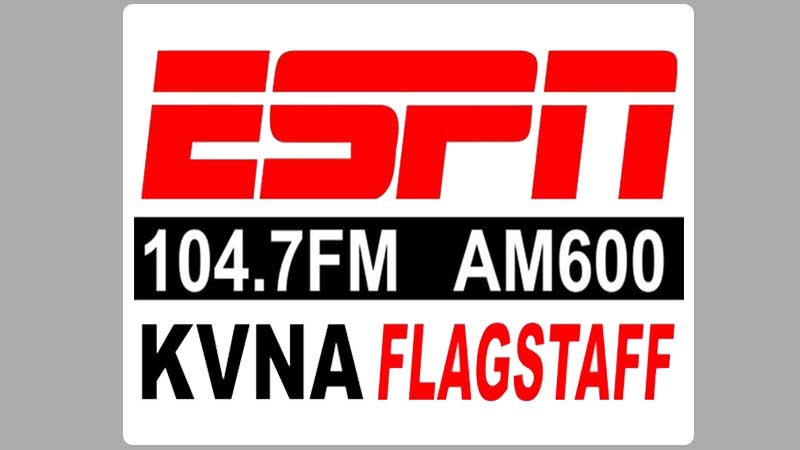 Besides airing Sports talk programming as its primary broadcast, KVNA also airs local news & TV shows and events. Famous DJs and shows of the station include:

KVNA is a class D AM service. Its facility ID is 68567. Radio operates with a sufficient radiated power of 1000 Watts (daytime) and nighttime power of 70 Watts. Its antenna mode is non-directional (2 Patterns), emitting analog signals. The station’s daytime listening range is within 60 and 130 miles from local to distant areas. The station’s local nighttime predicted coverage is 20 miles in the neighboring and 30 miles in the far-flung areas. The FCC granted it the license to broadcast on April 21, 2016. The transmitting coordinates of KVNA are 35.190567, -111.677661.