WVNA FM 105.5 is an American radio service licensed to serve Muscle Shoals, Alabama. The station airs mainstream rock to the Florence-Muscle Shoals Metropolitan Area. On-air, the station relates to itself as “Rock 105.5, The Big Dog.” Owned by Mike Self, through the license holder, Singing River Media Group, LLC, the service is a part of a six-station group run by Singing River Media in Southern Tennessee and North Alabama.

The WVNA call sign refers to “(The) Voice of North Alabama”. The slogan of the station is “The Shoals’ Best Rock.” The former call sign of the service was WLAY-FM from 1978 to 2000. WVNA-FM has five other sister stations viz, WLAY, WVNA, WLAY-FM, and WMSR-FM. Besides its round the clock, seven days a week on-air transmission, Rock 105.5 FM also streams online for listeners from across the world. It also maintains social media profiles to keep the audience updated. 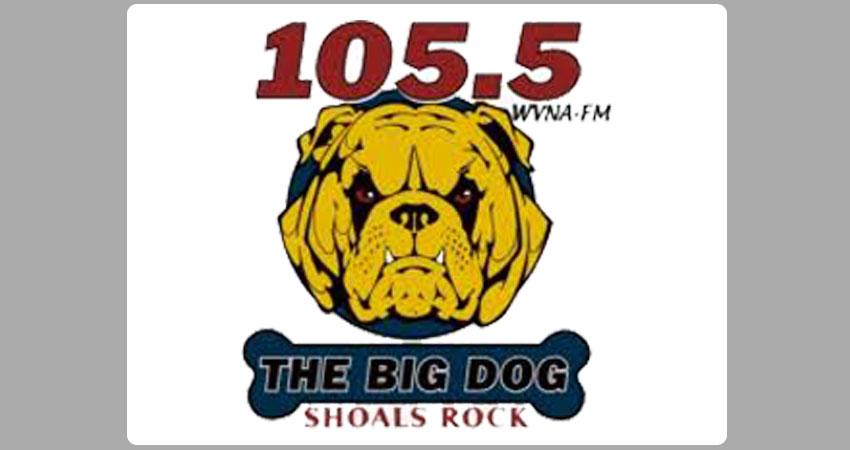 In addition to airing the mainstream rock music genre, the station also broadcasts local news and community events. The daily lineup includes Bob & Tom in the morning, native DJs Ash on mid-days, T.C. Kinkead in the afternoons, and Alice Cooper through the night. Other on-air personalities on the channel are Little Steven Van Zandt, Harlan, Dee Snider, Matt Pinfield, Bob Colburn, and Full Metal Jackie. The operation manager of the station is Brian Rickman.

105.5 Rock FM is a class A service with facility ID 60610. It operates with an effective radiated power of 4400 Watts. From a non-directional antenna, it broadcasts digital signals. The transmitting coordinates of the station are 34.674258, -87.713364. The local predicted coverage of the station is 20 miles, whereas the distant coverage area is 40 miles. The FCC acceded to its license to transmit on July 09, 2004, which would expire on April 1, 2020.