WAPI AM 1070 with the brand name “Talk 99.5, Birmingham’s Real Talk” is an American radio station on AM and FM dial licensed to serve Birmingham, Alabama. The station airs talk radio programming and is WZRR’s (its sister station) simulcast. Along with six other stations, WAPI is owned by Cumulus Media. It is also Central Alabama’s radio home of the Auburn Tigers.

Broadcasting in HD, the station’s studios are located in Homewood whereas, it transmits from Forestdale. The station allows the listeners to listen to it through live streaming. In addition, it runs contests, provides weather and traffic updates, promotes local events, and advertises the business. WAPI is one of the few talk radio simulcasts in the Birmingham broadcasting market, the others being WZRR and WERC AM- FM, 101.1 WYDE-FM, and 1260 WYDE. 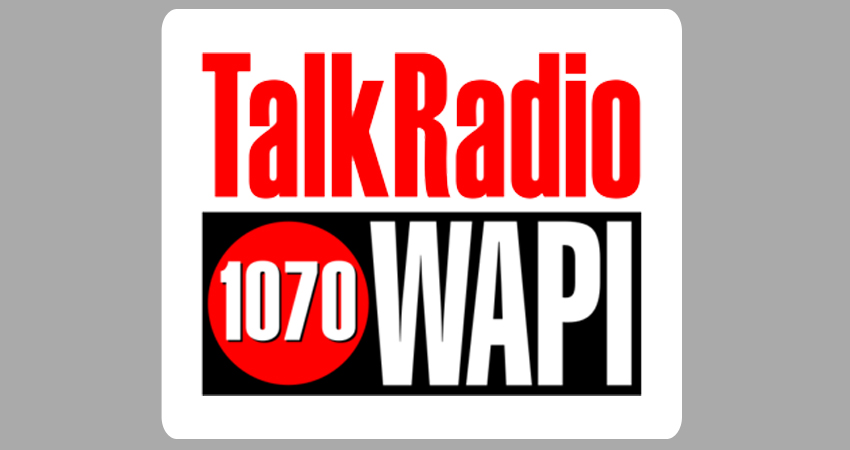 The following shows round out the weekday line-up:

Owned by Alabama Power Company, WSY had been the second broadcasting station of Alabama in 1922. Its call sign changed to WAPI in 1925 with the shifting of broadcasting facilities to Auburn. In 1928, it returned to Birmingham while in 1929, WAPI underwent the ownership of three owners, viz the University of Alabama, Alabama Polytechnic, and the Alabama College for Women. “The Voice of Alabama”, a businessman group purchased WAPI in 1932. In 1940, the service became a CBS affiliate. In 1947, it started WAFM, an

During the 1970s, it was the only adult contemporary radio station on AM dial in Birmingham. In 1996, it switched to an all-news format. In 2010, WWMM-FM took the WAPI-FM call sign. Both stations began simulcasting with the FM side being the mainstream station known as “100 WPI”; nonetheless, in 2013, WAPI-FM changed the calls and the format to WJQS carrying ESPN Sports. In 2016, WZRR started simulcasting WAPI-AM.

WAPI’s daytime power is 50,000 watts, the maximum power granted to AM stations by the
FCC whereas, during the nights, it transmits with the reduced power of 5,000 Watts. Licensed as class B, the station uses a directional antenna and transmits digitally. Its predicted listening is within 40-90 miles.