WBT News 1110 AM and 99.3 FM is a Class A commercial radio station based in Charlotte, North Carolina. The broadcast area of this station is the Charlotte Metropolitan area. It on airs News/Talk format under the brand “News 1110/99.3 WBT”. Its slogan “Charlotte’s News, Weather and Traffic Leading Charlotte’s Conversation” also reflects its format. This channel uses 1110 kHz frequency on the AM band. It consumes 50,000 watts power to run its programming. This station covers live sports coverage as well.

Entercom (Entercom License, LLC) operates this channel, being an owner. Firstly, it went on air on March 22, 1922. It has affiliations of Premier Networks, Westwood One, and ABC News Radio. WBT-FM, WLNK, and WFNZ are its sister stations. The studios and offices of the WBT are located at One Julian Price Place on West Morehead Street, in the west of Uptown Charlotte. The transmitter is set in the southern part of the city of Nations Ford Road. 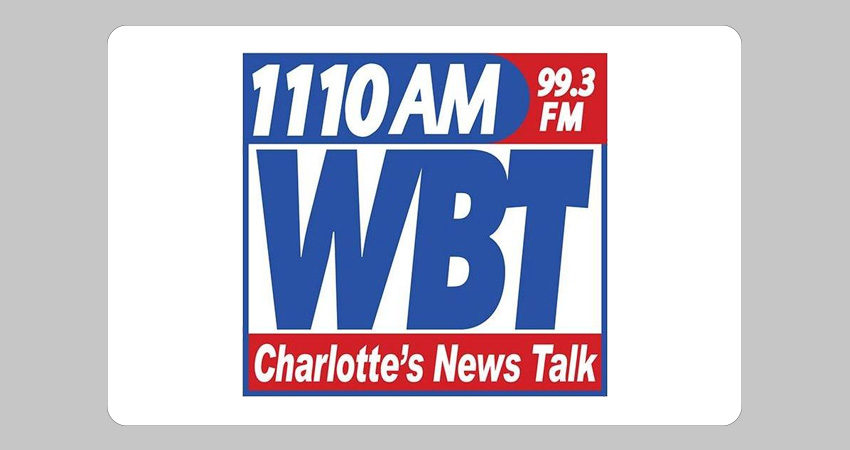 The channel uses non-directional antenna at day time and directional antenna during the night. During the daytime, its signals reached to Carolinas, as well as to the cities of Greensboro and Winston Salem, North Carolina and Spartanburg, and Columbia, South Carolina. During the night, the signals reach the Eastern half of North America. Listeners of all around the area hear its live streaming through its official link.

This radio station first signed on the air on March 18, 1922. Federal Radio Commission’s General order 40, specify this station as a “clear channel” at 1080 kHz frequency. In March 1941, under the North American Regional Broadcasting Agreement, its frequency moved to 1110 kHz. On July 19, 2016, Beasley Media Group began to operate this station. On October 18, 2016, Entercom declared that it would buy this station. And on November 1, it begins to run its programming.

The major programs of this radio station of all weekdays are Bill Cunningham, Coast to Coast AM, WBT’s Morning News with Bo Thompson, The Vince Coakley Show, The Pat McCrory Show with Bo Thompson, The O’Reilly Update, Rush Limbaugh, WBT Afternoon Programming, Charlotte at Six, The Ben Shapiro Show, The Mark Levin Show, and Beyond Reality Radio.

On Sunday, the programs signed on in the air are Caroline Focus, The David Chadwick Show, At Home with Roby, The Best-Of The Ben Shapiro Show, This Show is Cookin’ with Charles, Rush Limbaugh Week in Review, and The Tech Guy with Leo Laporte.